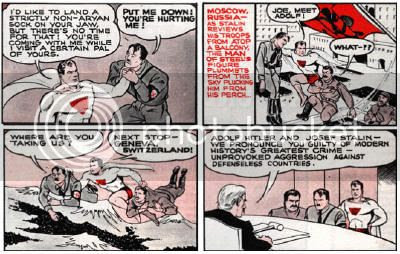 According to comics historian Les Daniels, Jerry Siegel and Joe Shuster were hired by Look magazine to put together a two page fantasy of how their popular recent creation Superman would resolve World War II. The Man of Steel simply plowed through the respective armies of Adolph Hitler and Joseph Stalin to capture the fiends and see them placed on trial by the League of Nations. This was before the Soviets allied with the Allies, and as Daniels pointed out, such stories only exposed the limits of Superman's power in addressing the real world. Still, it was swell to see, it really ticked off zee Germans, and who could ever forget a line like "I'd like to land a strictly non-Aryan sock on your jaw, but there's no time for that!" What, you didn't know Superman was really a Jewish Torontonian? "American Way" my cloven hoof...

Check out more highlights from the past 75 years of DC Comics at The Truly Most Memorable Moments of the DC Dodranscentennial
Posted by Diabolu Frank at 12:40 AM

"I'd like to land a strictly non-Aryan sock on your jaw, but there's no time for that!"" That is one great line. To which I would also add: Take your Übermensch and shove it, Nietzsche!"

I didn't know this moment in comics history existed. It's also kind of sad in a way, seeing how desperately people needed a savior in those days.

The Adventures of Kavalier and Clay touch on much the same themes. If you haven't, reading it is worth your while.