I don't mean to be up Brian Cronin's pooper all the time. I really enjoy Comic Book Legends Revealed, and I'm sure he has the best intentions, but he comes up with some of the most whack ass lists. I'll also admit that The Truly Most Memorable Moments of the Dodranscentennial hasn't been quite as historically broad or, well, eventful as I'd intended, but I see that as a work in progress. I still assert that Cronin's 75 Most Memorable Moments in DC Comics History left lots to be desired.

Once again, I find myself at odds with the poor guy, as his Top Five Bloodlines Characters left me scratching my hump. Gunfire, the man who could turn any piece of crap into an energy projectile, was the subject of a stupid stillborn solo series and much mockery. Didn't he accidentally blow his own ass off? Lionheart was an incredibly annoying tech-armored knight that plagued Justice League International during the nadir of its "who the hell are these people" European period. Loose Cannon was a blatant rip-off of the Peter David Hulk of the period, executed by Jeph Loeb in full hack mode. Nah, here's the top ten Bloodlines character from a source you should trust, given it's the name of this blog! 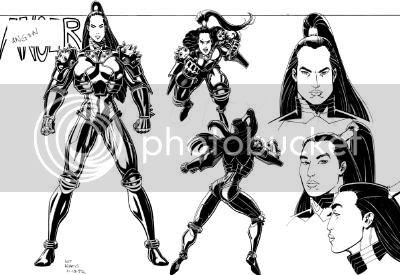 There were so many lousy New Bloods, I hate to validate them with even token inclusion here. Instead, how about I recognize that a ranking of Bloodlines characters technically includes the stars of the most annuals, the alien parasites? Angon was your typical hateful rebel badass chick, who just happened to become a heavily armored gargoyle thing. That is so much cooler than Layla, right?

Take Kitty Pryde, make her part of the Clandestine (a secret family of super-humans,) and give her electrical powers. Sparx wasn't the deepest character, but she was alright, and she managed a comparatively lengthy publishing life as a member of the Blood Pack and the Ravers in a Superboy spin-off title. Surprisingly still among the living.

The thing about Geist is that he's basically Spider-Man with half-assed invisibility powers. However, he was drawn by Jim Balent in his prime, has an amusing personality, and looks generally cool. Killed in Infinite Crisis after the usual New Blood resume of sporadic appearances and Blood Pack membership. 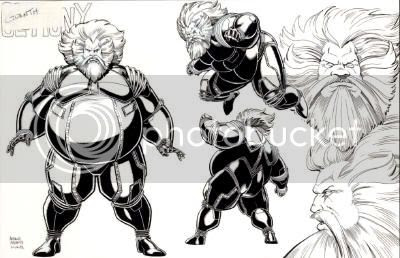 That name needs a permanent exclamation point behind it. Glonth! You rolly-polly bottomless pit of hunger and excess hair! Glonth! So many jokes at your expense, but you had such personality!

A John Woo loving good cop in dirty Gotham town, Ballistic sprouted an insectoid exoskeleton and carried heavy artillery as a member of the Blood Pack. One of two surprisingly non-stereotypical Asian super-heroes on this list, so of course he was killed during Infinite Crisis 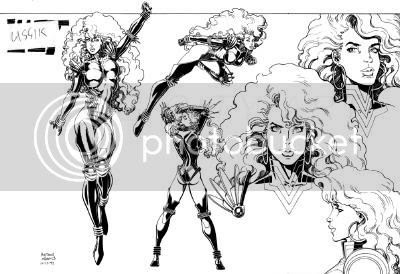 Mitch Byrd is a master of drawing extra-curvey hotties, and lustful Lissik was like Christina Hendricks as a shape-shifting vampire. Need I continue?

I haven't read her debut appearance in twenty years, but I distinctly recall the New Titans annual being one of the worst reads of a terrible lot. Still, the premise of a punk rock girl who could release her masculine aggressive side as a spectral force is pretty cool. Anima developed a slew of really impressive additional powers in her year-plus solo series, which had an impossibly dense metaphysical mythology. Unfortunately, like most New Bloods, she's been repeatedly used as cannon fodder. Last I heard, she was bisected, but I bet she could come back from that.

Nick Kelly was a cop deep undercover within the mob given meh powers by a parasite bite, but he had a strong story engine that carried him through numerous appearances in The Flash and a solid solo mini-series. Has the rare distinction of having had his eyes surgically removed repeatedly, and keeps bouncing back into action.

While very much a product of the '90s, Nightblade was still the rare Asian-American hero whose identity wasn't built upon martial arts mastery or math-fu. Further, Nightblade's super-power to regenerate from any injury was visually stunning, and comically macabre, as depicted by co-creator Mitch Byrd. Besides appearing in one of the best written and drawn Bloodlines annuals, Nightblade made numerous guest appearances, and was a member of the short-lived Blood Pack. He was supposedly killed during Infinite Crisis, but who buys that?

A high point for creators Garth Ennis and John McCrea, who worked together on the ongoing Hitman series for four years, plus an additional two on The Demon (within which Hitman was a supporting character.) I suspect Hitman was in the works before Bloodlines, as the super-powers bestowed upon Tommy Monaghan rarely figured heavily into his misadventures. Great character, swell series, glorious death, well remembered.

Maybe next time we'll do a top ten worst Bloodlines characters list? So many to choose from...
Posted by Diabolu Frank at 12:00 AM

I have an inexplicable love for Gunfire. I'm working on his solo series slowly but surely from the quarter bins.