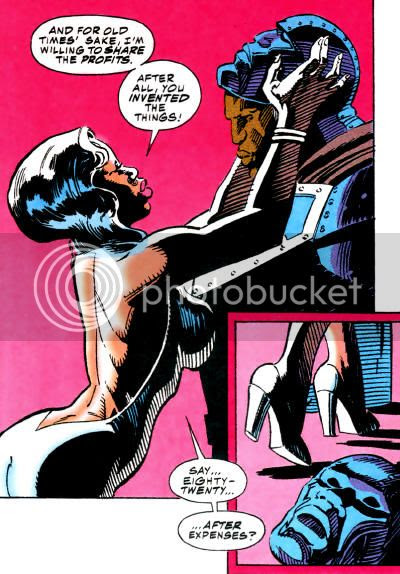 Gangbangers in Metropolis' Suicide Slum were videotaping themselves showing off their new Toastmaster assault rifles, and stalking the "Man of Steel" for a showdown. Iron John was aware of these Shark Enforcers, and lured them to an unpopulated area to drop the hammer. The Man of Steel questioned one hood about the White Rabbit's whereabouts, who was killed by another to keep him from squeeling, but the little idiot videotaped himself committing murder. Iron John brought the moron in, and later, Lex Luthor II bought the tape before the police knew what they had. Luthor's right hand man Happersen had the tape analyzed and augmented, until a clue was found indicating the Rabbit was held up in "The Spire," the downtown Metrospire Hotel. Meanwhile, the White Rabbit wanted to have a talk with "John Henry Irons... a.k.a. Henry Johnson," so she had her security blocks removed to make herself easy to find.

At the Daily Planet, Jimmy Olsen argued that none of these new Supermen reigning over Metropolis was the real deal, and Lois Lane agreed, but she was distracted by Jeb trying to move into Clark's vacated place. Jimmy was pleased that a gang skirmish between the Reavers, the Skulls, and the Man of Steel took precedence for Lois.

Over the site, the new Superboy mugged for helicopter news cameras before heading into battle. Fire the Metropolis Kid dodged struck the Planet's chopper, killing the pilot and sending Lois out the side door. The Man of Steel caught her, and upon landing was swarmed by the press. Lois wouldn't let Iron John go without questioning what claim he was making to Superman's legacy, as the other three pretenders were "falling all over themselves... trying to convince the world they're Superman." This Man of Steel made no such claim, and was just here to help. Iron John was also here to lecture, as he took Superboy aside and pointed out his fault in the pilot's death. Superboy at first denied responsibility, but the talk shook his resolve. Lois watched from afar and approved, wondering if Superman's soul might have walked into this Man of Steel's body. "This one feels right."

Lex Luthor II made contact with the Man of Steel, informing him about the Spire while secretly planting a bug on his armor. At the Hotel, John Henry Irons was confronted by Dr. Angora Lapin, who had years prior provided computer imaging expertise while Irons was developing the BG-80s for the government. The pair had once been lovers, but now Irons was a penitent super-hero, and Lapin was selling the BG-80s as Toastmasters under the guise of the White Rabbit. Angora had managed to retrieve Irons' designs from his computer, and once Iron John rejected her offer of a renewed partnership, she fired on him with their wares. The Man of Steel was thrown into a gas tanker, where he was sorta-but-not-really rescued by Superboy. Iron John explained that because he designed the BG-80s, he felt as responsible for the pilot's death as Superboy. The White Rabbit was even more so, but she escaped before either "Superman" could capture her.

While Lois Lane continued to wonder about the virtue of Clark Kent she had seen in the Man of Steel, Lex Luthor II was investigating John Henry Irons, a weapons designer wanted by the feds...

"Ambush" was by Louise Simonson, Jon Bogdanove & Dennis Janke.
Posted by Diabolu Frank at 12:00 AM