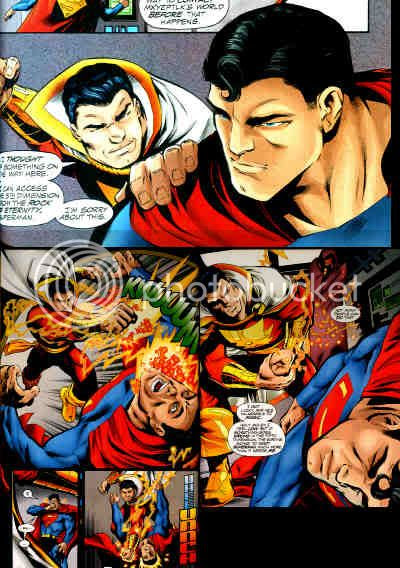 The Man of Steel may be the world's greatest hero, but in a war with 5th Dimensional Imps, his vulnerability to magic was a liability. Captain Marvel knew this, and should the Big Red Cheese fail in his own other-dimensional mission, "the Earth's going to need Superman much more than it needs me." To that end, the World's Mightiest Mortal would brook no argument, sucker punching Superman twice with fists full of magic. In just those two blows, Shazam laid the kryptonian down, and a generation of readers took note of Captain Marvel again after decades of neglect and misuse.

Check out more highlights from the past 75 years of DC Comics at The Truly Most Memorable Moments of the DC Dodranscentennial
Posted by Diabolu Frank at 1:09 AM

You just like seeing Superman get punched, don't you? Muahaha.