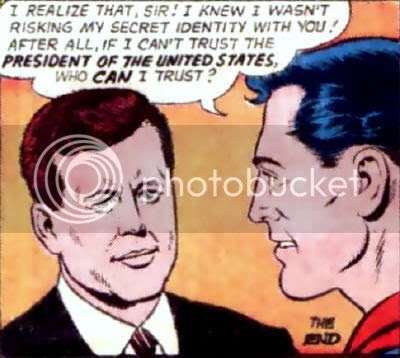 Hitler and Stalin weren't the only heads of state Superman has had notable relations with. The Man of Steel was in a secret identity SNAFU, having to appear on television with his alter ego Clark Kent, as well as many of his super-heroic pals. Who then could the Strange Visitor from Another Planet turn to for aid in impersonating Clark Kent? None other than John Fitzgerald Kennedy his own self, in a story published a month after his assassination! In a private room, Jack asked if he could remove his Kent disguise, while Superman complimented his perfect performance. "Superman-- I told you to call on me if ever you needed help-- and I'm glad you did! And I'll guard your secret identity as I guard the secrets of the nation!"

Superman concluded, "I realize that, sir! I knew I wasn't risking my secret identity with you! After all, if I can't trust the President of the United States, who can I trust?" The whole nation would soon ask themselves that question, whether because of Johnson's commitment to Vietnam or Dick Nixon's wiretapping scandal...
Posted by Diabolu Frank at 12:00 AM

How'd he go from revealing his secret identity to JFK to this?

Rad! I've never seen that one before!