The Secret Origin of The Huntress: "From Each Ending... A Beginning!" (November-December, 1977) 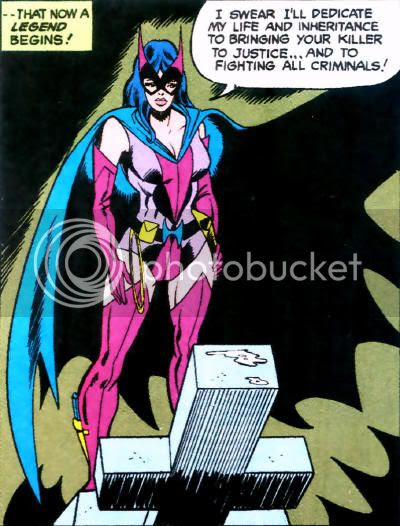 The vigilante Batman and thief Catwoman began their feuding in 1940. This continued until Selina Kyle decided to reform, surrendering herself to the authorities to serve prison time for her crimes. Gotham City millionaire Bruce Wayne was waiting with open arms after Kyle's release, and the couple were married with great fanfare in the Summer of 1955. Two years later, Helena Wayne was born, inspiring the Batman to go into semi-retirement. While Bruce Wayne turned to less objectionable social activism, an adult Robin continued to patrol Gotham.

On Earth-Two, the Golden Age Waynes watched their daughter grow to womanhood, just as sharp-minded and beautiful as her parents. Unfortunately, those same years encompassed the prison sentence of Silky Cernak, a hireling of Catwoman's who had been sent up by Selina Kyle's testimony after she went straight. Looking for payback, Cernak produced a picture of Catwoman unintentionally strangling a guard with her cat o'nine tails. To save her marriage, Catwoman would come out of her retirement for one last job, in exchange for the destruction of Cernak's negatives.

Acting on a tip related to the heist, Commissioner Gordon lit the Bat-Signal, and was surprised when Batman answered instead of Robin. Dick Grayson was on foreign service duty in Madagascar, so it was the Dark Knight himself who would catch Catwoman's old gang at the Gotham Civic Center's rare gems exhibit after hours. The Caped Crusader crashed into the costumed Cernak, whose misfired bullet struck Catwoman in the chest. Batman realized this was the love of his life falling to her death from a fifth story balcony, and at the bottom learned she'd done it all for her Bruce. "That late Summer's eve in 1976," Wayne burned the Batman's cape and cowl, swearing off the role for good.

Helena Wayne held firm as her broken father wept for their loss. Night after night, the Bat-Signal went unanswered. Finally, a new bat-shaped shadow appeared in a Gotham graveyard. "Though only the silent gravestones bear witness, the fates themselves would surely admit-- that now a legend begins! ...This night, The Huntress was born!" Garbed in purple and blue, removing her mask briefly to shed tears at Selina Kyle's grave, Helena Wayne made a vow. "I swear I'll dedicate my life and inheritance to bringing your killer to justice... and to fighting all criminals! I swear it... Mother..."

Through a disreputable collector and a wiretap, the Huntress learned of an upcoming midnight meeting with Silky Cernak at Gotham Harbor. Able to affect the gravelly voice of her own father, the Huntress worked a confession out of Cernak-- that he'd doctored the photo to convince Catwoman to do his bidding. The Huntress easily beat Cernak unconscious, then left him hanging in a net outside police headquarters. Bruce Wayne didn't realize Robin had made it back from Madagascar, to which his daughter chimed, "Maybe it wasn't Richard, Daddy. I have a feeling it was someone else-- someone new. Whoever it was, I have a feeling they're here to stay!"

All-Star Comics #69 and DC Super-Stars #17 were both released on August 22, 1977. One book officially served as the introduction venue of the Huntress, and the other offered her origin. A canny bit of cross-promotion, although neither book was long for this world. However, the Huntress continues going strong, having since become a DC Comics staple featured in television and cartoons. The Huntress was created by this story's creative team of Paul Levitz and Joe Staton, joined by inker Bob Layton.
Posted by Diabolu Frank at 12:00 AM

When I first heard that Huntres was not only Batman's daughter, but Catwoman's as well, I thought it was a joke. Now I think it's kind of cool, and I've got to try to find some Earth-2 stories to see what all the fun is about.

I am happy to say I have both her first appearances - I really liked the All-Star revival and basically 70's and early 80's JSA in general.