The purple sphere, as bright as the sun (if the sun were, in fact, purple), filled every inch of space around Gold and the rest of his Metal Men.  They floated in a vast area with no discernible up or down and it wasn’t until the purple light faded that Gold realized they were floating in outer space.
But as he looked at the stars whirling around, none of the constellations seemed familiar.
He turned his head to see Platinum floating a few feet above him, with Iron and Lead not far behind.  The lifeless robot body of Tin floated behind them.  He couldn’t find Mercury until he looked up and noticed that the red robot had expanded into several large globules which pulsated noiselessly through space.
And, behind him, the Injustice Gang floated helplessly through the vacuum of space, clutching their throats, eyes bulging, desperately needing air.
Gold stretched out his arms and encircled the group of villains and towed them in towards him.  Even if they were pretty vile, that was no reason to let them die a horrible death.
Gold looked down at the planet beneath him.  They had yet to reach the upper levels of the atmosphere.  Clouds swirled temptingly across the planet’s surface.  He wondered if he would be able to get them into the atmosphere in time.
And that’s when something big and red and gold streaked by him and pulled the villains from his grip and flew back down towards the planet.  And no sooner had it gone than the red blur returned, in the shape of a man in a red suit with a gold lightning bolt emblazoned across his chest.
He flew towards Gold and grabbed his arm, then collected all the other Metal Men, even the lifeless Tin, and flew them down towards the planet.
Clouds swirled by and the weight of the atmosphere pressed around Gold’s body.  The sky turned from star-crusted black to regular sky blue and he found himself standing in the middle of a park on a very sunny day.
“Who are you?” Gold asked the man in the red suit and white cape.
“Why, I’m Captain Marvel.  Welcome to Fawcett City.  And who might you be?” 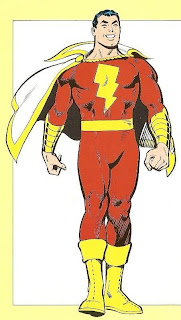 The Big Red Cheese
Gold introduced himself and the rest of the Metal Men.  He paused however, when he looked down at Tin’s body.  “This is…was…Tin.  Those men that you saved.  They took his responsometer out of him—without it, he’s lifeless.”
“Those men that were out in space with us.  They’re the ones who did this to Tin.  What have you done with them?”
“I took them to the Fawcett County Hospital.”
“Make sure that they are placed in jail as soon as they are able,” Gold said, “we need to get Tin’s responsometer back, and the device they used to teleport us here.”
Captain Marvel placed his hands on his hips.  “I see.  I think I can help you with that.”  He squinted into the sun as if thinking of a plan and then looked back down at Gold.  “But we’re going through a little crisis here in Fawcett City.”
“What kind of crisis?” Mercury asked.
Captain Marvel smiled.  He had a rather regal bearing about him.  “We seem to have lost Hoppy.”
“Hoppy?” Platinum asked, “who the heck is Hoppy?”
Marvel turned and regarded them with a look of astonishment.  “How could you not know who Hoppy the Marvel Bunny is?  He’s part of our Marvel family of superheroes!”
“Hoppy the Marvel Bunny?!” Mercury said, “oh, that is too rich.”

Behold: Hoppy the Marvel Bunny
“Where exactly are you fellas from, anyway?” Marvel asked.
“We’re from Earth.  And could you tell us where we are now?”
Captain Marvel tapped his chin thoughtfully.  “Well, that is strange.  This is Earth, and I’ve never heard of you Metal Men before.”
“I think we may have been teleported into another dimension,” Gold offered.
“Well, I suppose that’s possible,” Marvel said.  “Now, about your friend.  You’ll have to get his responsometer on you’re own, I’m afraid.  I can’t have Hoppy running around loose in his mortal bunny form.  But it shouldn’t be hard.  I’ll give you directions to the hospital.  You can get there two ways, the scenic route through the park, if you’re up for a nice walk, or through Fawcett.  Which would you prefer?”
Choices:
1.  The scenic route.
2.  The city route.
Posted by LissBirds at 3:40 AM