You Chose To Stay And Fight off the Injustice Gang

You have chosen to stay and hold off the Injustice Gang
“I don’t know, Adam, that sounds a little risky,” Gold said into the signaling device, “I might just take my chances here.”
“Roger that,” Strange said, “good luck.”
Gold put the signaling device back into the drawer and slid it shut.  It sounded as if the League were in trouble.
Another loud slam from out in the hallway made Gold look up.  The Injustice Gang were slamming against the back of the cabinet which Gold had moved in front of the door.  It rocked back and forth, until a sizzle of blue-green energy heaved the entire cabinet up in the air and tossed it aside with a crash of wood splintering and glass shattering.
Gold turned to face the oncoming attack.  Captain Boomerang lumbered into the room first, followed by Floronic Man and Abra Kadabra.  They stepped aside to allow the rest of the Injustice Gang passage, Shark, I.Q., and Ocean Master.
“Well, well,” Captain Boomerang said looking squarely at Gold, “looks like we’ve got ourselves our robot—OW!”  Before he could turn around to see that Iron had hit him on the head, Platinum had roped herself around him in an inescapable metallic spider’s web.
Mercury slipped through the doorway and wrapped himself around Ocean Master.  The two tangled about the room as the rest of the Metal Men burst into the lab.
Iron hammered at Shark until he was down, Tin bravely wrapped himself around I.Q.’s head, blinding him, and Lead attacked Floronic Man.
Amidst the din a wisp of smoke swirled about the corner of the room and expanded, curling up to the ceiling.  A white light burst into the room and out of the mist stepped a cloaked man.  His hat cast a shadow about his face so that it appeared as if he were wearing a mask over his eyes.  He raised a gloved hand and the din and confusion stopped.
The Injustice Gang stood (or lay, depending on where they had been) frozen in space.
The stranger walked up to Gold.  “I am the Phantom Stranger,” he intoned, “you and your Metal Men are needed elsewhere.” 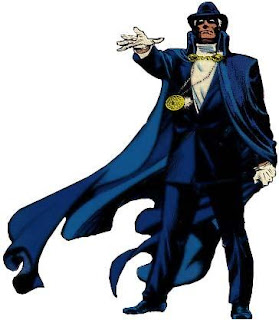 The Phantom Stranger being awesome.  It's what he does best.
“We are?” Gold said.  If he were human, his voice would be shaking.
“Yes.  Follow me.”  The Phantom Stranger stretched out his hand.
All was darkness.
Click here to continue the adventure.
Posted by LissBirds at 8:10 PM