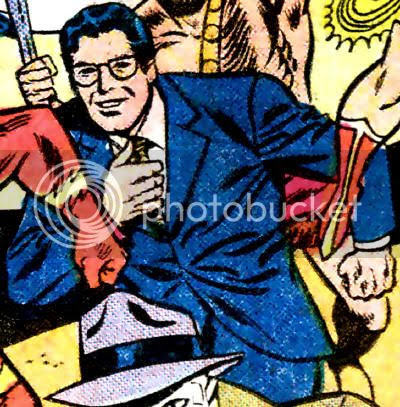 Clark Kent, mild mannered reporter for the Daily Planet, was following a flurry of news stories coming in over the wire. A gang war had broken out in Gotham City. Aquaman and the Global Guardians were caught in a conflict with the Legion of Doom. The Manhunter from Mars, once a respected member of the Justice League of America, was on a terrible rampage. A whole host of heroes, including Superman and Wonder Woman, had been declared missing. What a tragedy! Oh, the humanity!

As Kent strolled past a supply closet, several sets of hands reached out and pulled him into the tiny room. Inside were Brainiac 5, Sun Boy, Dawnstar and Shadow Lass, all members of the Legion of Super-Heroes. These were, of course, teenagers from the 30th Century inspired to heroism by Superman's example.

"Thank griefe we found you!"
"According to my calculations, this is the approximate time frame in which the ongoing unraveling of time-space continuum due to the disappearance of Superboy in 1961 could best arrested. Now we can correct for the damaged caused by our teammates, and insure our continued existence. Are you ready to fix the universe, Superman?"

"Ah, what? I don't know what you're talking about."

"Oh come on now, Superman. This is no time for joking! In fact, if we don't act fast, there may be no time left at all!"

"Listen, I don't want any trouble. I'm just going to head back to the press room, and pretend this never happened."

Brainiac 5 created an airless forcefield around Kent's head while Dawnstar and Shadow Lass removed his jacket, shirt and tie."

"Look Brainy-- he's already starting to bruise."
"Nass!"
"Oh, this is fan-sprocking-tastic. Now we're all going to die."
"What is it with 20th Century Earth. Why does the fate of the entire universe always seem to rest on the shoulders of upright talking monkeys with a death wish? I say we swing the time bubble around to one of their quaint little liquor stores, buy a few bottles of their peach-flavored liquid depressants, and head back home to wait for the entropy wave. Who's with me?"

Not ready to give up yet? Try again, you upright monkeys.