You Have Chosen to Fight the Ferocious Tigrabars!

“Come on!” Gold said, “don’t worry about the Injustice Gang for now.  Let’s take down these tigers!”
“Do we really need to hurt them?” Tina asked, “they’re so pretty.  Just like Earth tigers!”
“Only twice as big and with a nasty pointy horn on their heads,” Mercury muttered.  He then let go of Abra Kadabra. 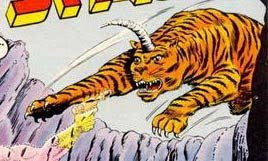 Tigrabar in its natural habitat
“I shall slay these beasts!” Ocean Master said.  But then a horned tiger (or tigrabar, which is what they’re known on planet Rann, which is where are heroes are) sprang into the air and knocked him down before he could even raise his trident.
“Halt!” Abra Kadabra commanded, raising his arms to conjure a spell.  A burst of blue-green magic hit the nearest tigrabar squarely in the face.  It shuddered, shook its head, and recoiled.  And then, it let out a ferocious roar and launched itself at the magician.
I.Q. ran around screaming.  Shark snapped at a pair of tigrabars, but only succeeded in keeping the beasts at bay for a few seconds before they both pounced on him.
One of the beasts landed on Gold.  He flattened himself out into a foil sheet.  The beast stood over him with a puzzled expression, then sat down on its haunched and waited.  One thing about cats is, they are very patient.
The vicious tigrabars continued their onslaught, taking down each member of the Injustice Gang and the Metal Men.  Getting mauled to death by a pack of tigers on an alien planet isn’t the best way to go, but a tiger with a horn on its head?  That’s pretty cool.  And Tina was right: how could you attack anything this cute?

The End.  Start over.  And don’t forget to check out these other fine blogs!