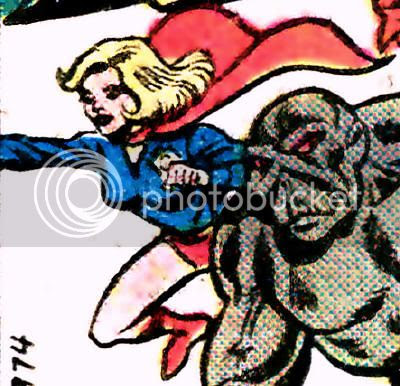 This was supposed to be the story of how Supergirl learned there was an evil version of herself mucking about with the DC universe. She was going to meet Ambush Bug, who would have told her a skewed version of her actual publishing history, leaving the Maid of Might so incredulous she institutionalized him. She would then try to find her cousin Superman.

I'm sorry I never had the time to tell that story, but it wouldn't be fair to you not to offer some clues to the overall challenge. Let the Flash guide you to where Superman is located, and together, they'll help you gather up all the heroes you'd ever need to combat evil.

Also, I'd like to congratulate Anj on doing a nice job with the page, especially the much loved Wrong Answer Streaky. I'm a big fan of the Comic Box, and recommend Supergirl fans follow it!