The Metal Men from Comics Make Me Happy!

1986.  A gigantic laboratory complex in a secluded, undisclosed location….
“I hope you’ve all been enjoying National Visit A Genius Inventor’s Lair Day Field Trip,” intoned Mrs. Winters from behind a makeshift podium set up in the gathering room, “now we’re going to meet Doctor Magnus’s creations.”
“Aww!  I thought we were going to meet Superman!” Tommy Higgins shouted from the back row.
This first outburst unleashed a chorus of complaints, as one kid speaking up was always secret ten-year-old code for “all-clear-now-everyone-can-shout-too,” and what was unfurled upon Mrs. Winters were the kind of complaints and non-sequiturs that only ten-year-olds can make, and which often require adults to take some sort of headache reducer after eight hours of hearing them.
“I wanted to meet Batman!”
“I promised my Dad I’d get Wonder Woman’s signature for him!”
“I use Buster Gold Super Smile Toothpaste!”
“I have to go to the bathroom!”
“Is the Flash coming?  Can I race him?”
Added above the fray of little-kid voices was the throaty voice of Mrs. Winters (who used to sing alto in Apex Community Light Opera in her hey-day), but even forty years of training and experience in using the human voice as an instrument wasn’t enough to be heard over the ululating cacophony.
The only thing that silenced this was the sudden appearance of a glittering, gold-covered man on the stage next to Mrs. Winters.
“Oh my gosh!  It’s Cliff Steele!” shouted Tommy Higgins.
The golden man motioned for Mrs. Winters to take a seat.  He then stood, squared his shoulders, put on his most heroic face and said, “No, not exactly, children.  I’m Gold, the noble leader of the Metal Men.”
Upon seeing a real-live man made out of gold speak, the children hushed a chain of “shhh’s” at each other.
Gold continued to speak, “I, along with my fellow Metal Men, was created by genius inventor, Doctor Will Magnus.  Allow me to introduce them.”  He swept his hand in a grand arc, signalling the appearance of five other metallic people, with one regular-looking human man following them.
“Wow,” said Tommy Higgins.
“Please,” Gold said, “let me introduce you to Lead, Iron, Mercury, Tin, and last-but-not-least, Platinum.  We are all very special robots.  Lead, if you would start things off for the children?  Tell us what your specialty is.” 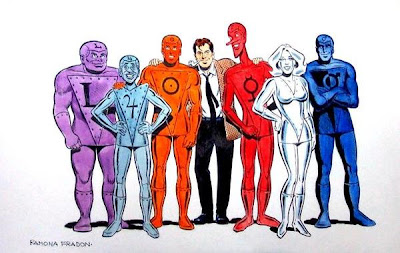 The Metal Men with their creator, Will Magnus.
From left to right: Lead, Tin, Gold, Doc Magnus, Mercury, Platinum, Iron.
The heavy-set robot hulked across the stage, and spoke very slowly, “I’m Lead,” he said, and flexed a thick arm, “I’m the best when it comes to making shields.  I can even shield against X-rays.”  He stepped back and started to change—stretching out his body so that it formed a walled shield.  With a metallic *shlump* he contracted back into his original shape.
“I thought lead was bad for people?” Sally Connor said.
Lead stood there and wrung his hands.  “Um.  I uh…”
Before he could say any more, a tall red robot pushed in front of him.  “All right, you’re taking too long.  Let’s get on with it.”
The children laughed.
“I’m Mercury,” the tall robot said.  “I’m the only metal that’s liquid at room temperature.  What do you think of that, kids?”
Which then released another chorus of ten-year-old voices.
“How come you’re not liquid now?”
“I thought Mercury was silver-colored?”
“My dog Travis ate a thermometer once, and my Dad said it has mercury in it and that’s bad, and we had to call the special vet and they made Travis eat charcoal and it was really gross, and my dad said the vet was really expensive and that it was highway robbery and then he got really mad at my Mom for leaving the thermometer on the counter—”
“Yeah, okay, whatever, kid,” Mercury said.  “Come on, Iron, do your thing.”
A tall, muscled dark blue robot stepped up next.  “I’m Iron.  I’m strong.”  He stepped back, adding nothing.
The next robot stepped carefully in front of Iron to address the children, stood there for a few seconds wringing his hands, and then stammered.  “Hello, children.  I-I-I’m Tin,” said the short robot, “I’m softer than zinc, b-b-but harder than lead.  No offense, Mr. Lead.”  He slunk away back to the group.
Next, a silvery woman robot stepped forward.  “I’m Platinum,” she said, “but everyone calls me Tina.  I can be drawn into a wire so thin, it would take eight million strands to form a cable only an inch in diameter!”
Finally the only human in the group stepped forward.  Doc Magnus wore a loud tan suit with elbow patches and he seemed the kind of guy who read nothing but Scientific American.  “That’s wonderful, Tina.  Now go back and stand with the others.”
“No!” The metal woman protested, “I want to stay with you.”  She wrapped her metal arms around him.  Doc Magnus blushed and tried to shrug off her grip, then gave up and said, “All right Tina.”  He looked out across the sea of ten-year-old faces.  “Now, children, I want to explain why my Metal Men are so unique.  See, I believed the key to creating an intelligent and functioning robot was to give them unique personalities which belie both strength and weakness—a robotic soul, if you will—so I invented the responsometer, a device that when placed in a specified volume of metal, will animate this metal in a way that is reflective of the unique traits of each metal.  While this sounds rather like alchemy of Medieval times, the similarities end on the surface, and I prefer to think of this as the expiation of Fodorian multiple realizability—” he then paused suddenly, slipped his hand into the breast pocket of his suit and looked down at a small, blinking device.  He looked over at Mrs. Winters and then the rest of the children.  “I’m sorry, but I’ve been called away on a League emergency.  I’m sure Platinum and the rest of my Metal Men will keep you occupied for the rest of the afternoon.  Mrs. Winters, children.  If you’ll excuse me.”  He unwound Platinum’s hands from around his shoulders and slipped quietly out of the room.
“Oh my gosh!” said Tommy, “League..as in Justice League?!”
The other children started murmuring with excitement.
“This is totally wicked!”
“I want to meet Batman!”
“I want to meet Buster Gold!”
The Platinum robot addressed the crowd of children.  “Children, if you please.  We’re going to bring you on a tour of the lab.  So if you follow your teacher and line up by the door—”
The lovely platinum robot wasn’t able to finish her sentence when a muffled explosion rattled the walls and shook the floor underfoot.  From a jagged hole about twelve feet in width that appeared in the wall came a group of strange-looking men.  Greenish-blue energy crackled into the room and a shark-headed man emerged from a cloud of plaster dust.  Following him were a man in a purple suit, a man who seemed to be part-tree and had leaves instead of a head of hair, and a balding guy wearing a little cap and sporting an arsenal of boomerangs attached to his jacket.  A man in a blue cape and sporting a finned helmut stepped forward and raised a golden staff.  “We are here for the Metal Men!” he shouted.
The children screamed and starting running in every direction.  Mrs. Winters screamed in her alto-forty-years-of-classical-training voice.
The man with the boomerang outfit stepped forward and addressed Gold.  “If you don’t come with us,” he said in an Australian accent, “the kids will get it.  Understand, mate?”  Gold recognized him as Captain Boomerang.  The others were Abra Kadabra, Shark, I.Q., Floronic Man, and Ocean Master.
Gold nodded, and then eyed his fellow Metal Men.
What to do next?
1.  Go with Captain Boomerang and the rest of the Injustice Gang.
2.  Try to fight the Injustice Gang off.
3.  Split up and bait the Injustice Gang into chasing you.
4.  Run away!
Posted by LissBirds at 11:41 PM