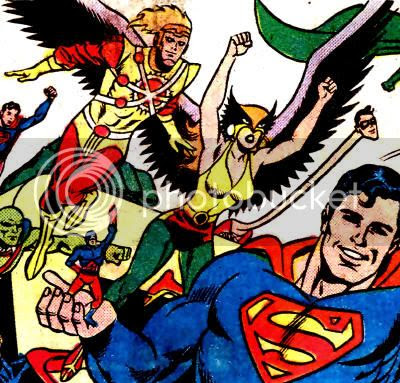 After dropping off her ornery husband, Hawkgirl flew her Thanagarian spaceship to Los Angeles, CA. It was there, from his modest apartment,that Captain Comet had recently sent out a psychic distress call. Unfortunately, even as she had felt the touch of the interstellar hero's
anguished mind, it had evaporated into an odd malaise. Consciously, Shayera wanted to help this fellow in need, but for some reason, she emotionally felt a great hesitation. Regardless, she was a decorated Thanagarian wingwoman tasked with protecting and serving the good. She would not be swayed from her path.

When no one answered, Hawkgirl smashed down the door to Adam Blake's apartment with her medieval mace. Inside, the furnishings were sparse, with little room for any evildoers to hide within. A quick survey turned up nothing out of order.

Suddenly, a shift in the air announced a presence Shayera had not previously detected. A hand gripped the back of her neck like a steel vice, and flung her out of the apartment, into the hall, and through a neighbor's door. As the Winged Wonder struggle to her feet, a burst of wind lifted her off her feet, across the unfamiliar room, and sent her crashing into a small wall-mounted personal bar. In her mind came another voice, but one she knew from the recent past.

Hawkgirl didn't know J'Onn J'Onzz, the Manhunter from Mars all that well, as he was on his way out of the Justice League of America while her husband was on his way in. What she did know, was that she was sick of his crap, and that he had a catastrophic vulnerability to fire.

Swinging her mace at the twisted remains of the aluminum bar, the resulting sparks set the alcohol surrounding Hawkgirl aflame. Shayera's wings partially protected her, but they were themselves alight, so Hawkgirl had to be quick about using their flammability as a shield. While the so-called "Alien Atlas" crumpled into a corner like a frightened child, Hawkgirl storm out of the room, leaving sparking feathers in her wake. Reaching the roof of the apartment building, she stripped off her wings, and cast them over the ledge. Small patches of fire had been left in her wake, and something would have to be done soon to safe the old complex from becoming a tinderbox.

Hawkgirl climbed into her spaceship, and lifted off. As she was banking to return to the ever-growing inferno-in-the-making, she spied the Martian Manhunter come flying out a side window. She didn't know how effective he would be in the air over this building, but she wasn't terribly anxious to find out, either.

Stand and Deliver?
Posted by Diabolu Frank at 12:58 PM